A pleasant riverside walk from Vauxhall Bridge to Tower Bridge, will give the opportunity to walk past all the bridges in Central London and visit many of the attractions along the way. The first building to see next to Vauxhall Bridge on the Albert Embankment is the MI6 Building, seen in many movies including the latest Bond movies, it is the British Secret Intelligence Service headquarter. The building on the other side of the river is Tate Britain one of the main art galleries in London.

Continuing along the embankment, Lambeth Bridge and the adjacent Lambeth Palace can be seen. The palace is the official London residence of the Archbishop of Canterbury with beautiful gardens open the first Wednesday of the month from March to October. At the entrance of Lambeth Palace is St.Mary-at-Lambeth church now housing the Garden Museum reopened in 2017 after an extensive renovation. In the churchyard there are a number of graves including Captain William Bligh’s; he was in charge of HMS Bounty at the time of the mutiny of its crew in the South Pacific. From the riverside outside Lambeth Palace there are beautiful views of the Houses of Parliament and the Elizabeth Tower across the river. 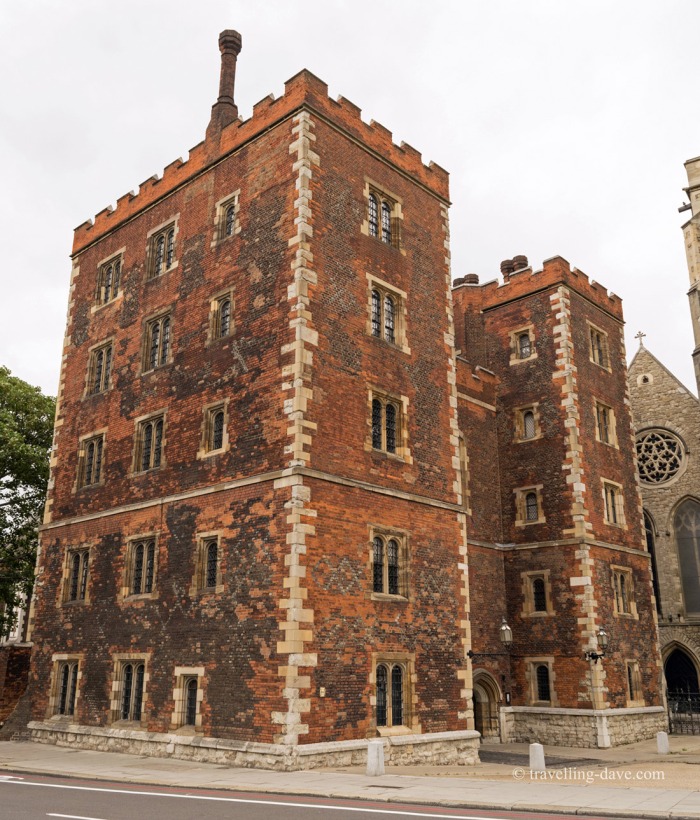 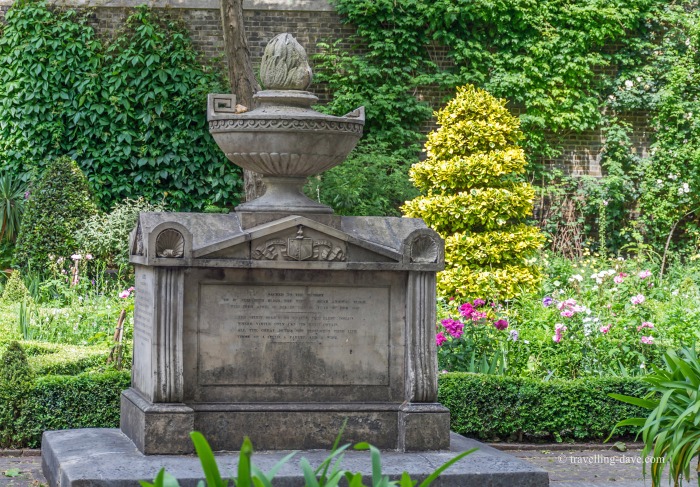 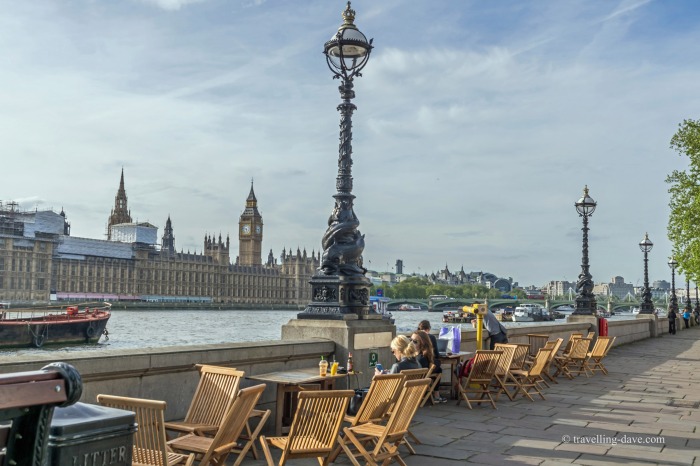 The Thames Path continues to Westminster Bridge and the busy South Bank; before walking under the bridge, there is another classic view of the Elizabeth Tower with the opportunity to take a picture framed by an arch in the bridge passageway. 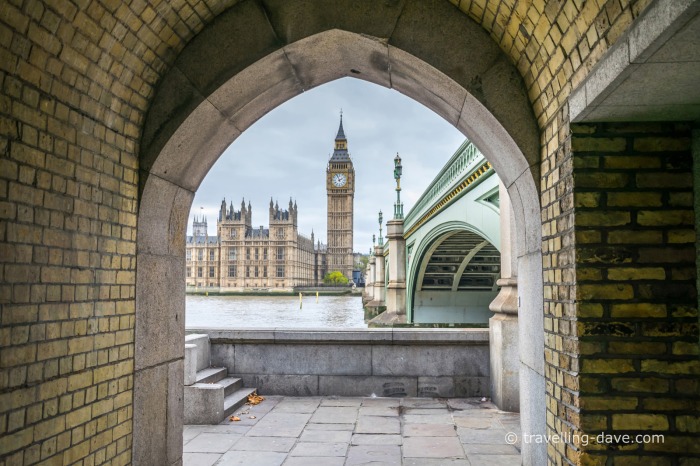 The large building immediately after the bridge is County Hall, the former headquarter of the Greater London Council. It now houses a number of attractions including SEA LIFE London Aquarium, the London Dungeon and Shrek’s Adventure.

Outside, street performers keep the crowds entertained juggling, miming or just standing like living statues, moving only to thank someone who dropped a coin in the box at their feet. In summer street vendors can also be found here selling snacks including popcorn and candy floss.

Past the people queuing to get on the London Eye, walking under the Golden Jubilee footbridge towards Waterloo Bridge, the ever so popular Southbank Centre Book Market is still going strong oblivious to the Kindle revolution. Nearby, teenagers practice their skills on skateboards at the Southbank Skatepark under the Royal Festival Hall, while children (and some adults too!) run in and out of Jeppe Hein’s “Appearing Rooms” Fountain on the terrace above. 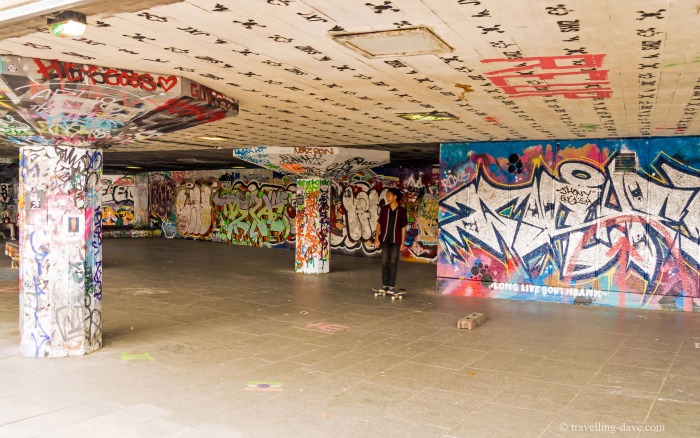 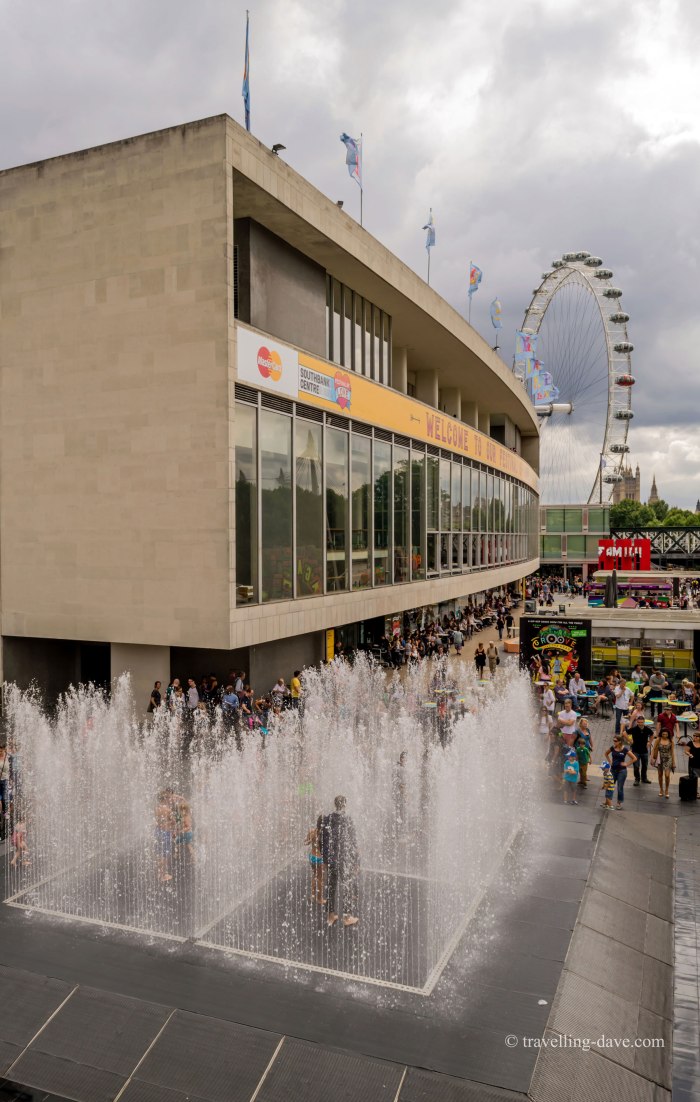 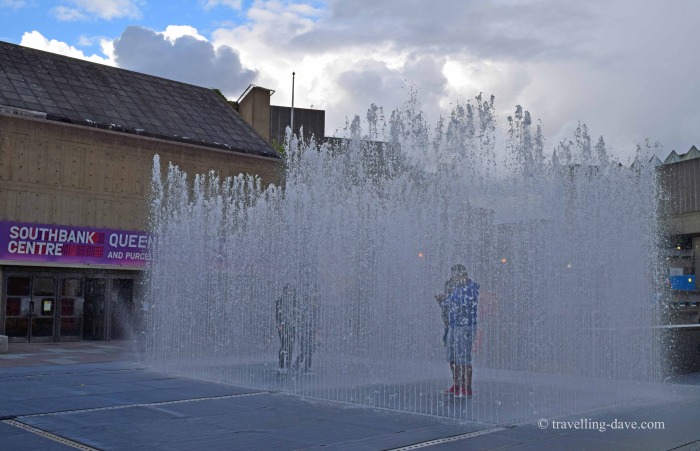 There are events and exhibitions all year round on the South Bank, from the Udderbelly Festival to plays at the National Theatre . 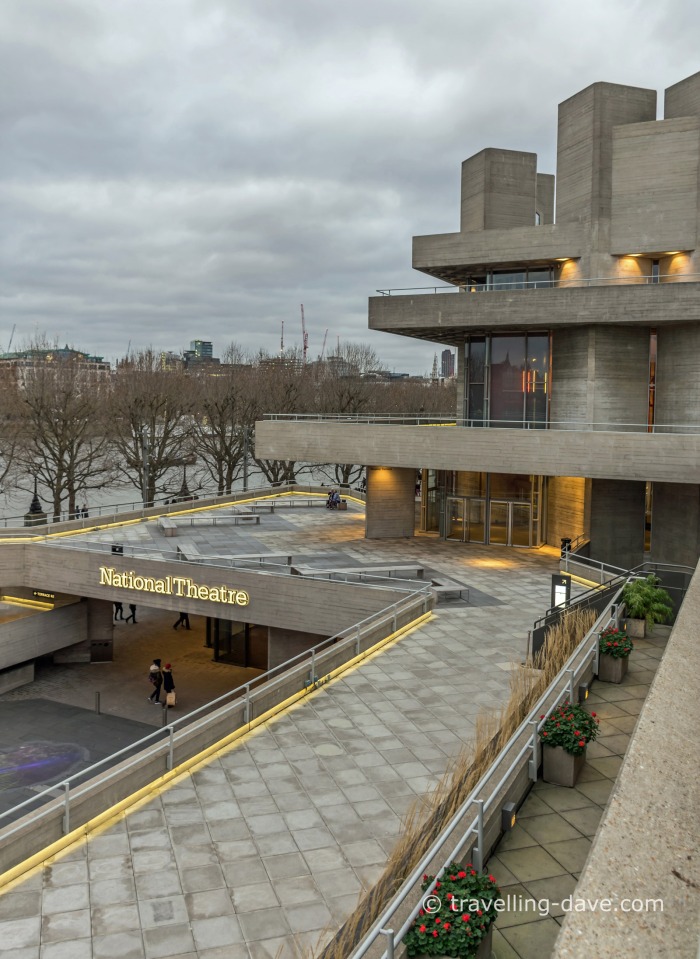 A few yards down the road, it is worth to take a detour into Gabriel’s Wharf to explore the quirky shops and maybe have a meal in one of the restaurants there. Further along the river is the OXO Tower with art galleries, shops and a restaurant with a terrace with beautiful views. 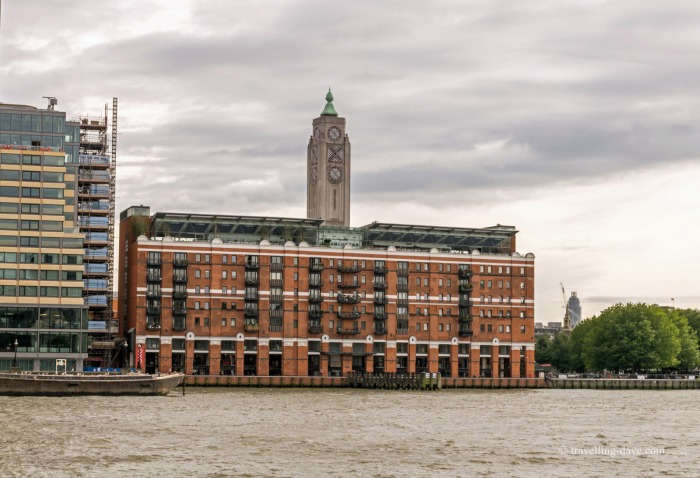 Next is Blackfriars Bridge, recently renovated to allow access to Blackfriars Station from the other side of the river Thames; as part of the renovation, solar panels have been installed on the bridge making it the world’s largest solar-powered bridge. This area is known as Bankside and it stretches between Blackfriars Bridge and London Bridge. A short walk from Blackfriars Bridge is the Tate Modern, a refurbished power station filled with artworks from artists such as Andy Warhol and Picasso to temporary exhibitions in the enormous Turbine Hall; stunning 360 degrees views of London can be enjoyed from the tenth floor of Switch House, an extensions recently built on the side of Tate Modern providing an extra 60% of exhibition space. Modern blocks of flats built next to the Tate Modern before Switch House was built, have now inadvertently become part of the attraction with visitors able to peer into the living rooms of the multi-million pounds worth flats. 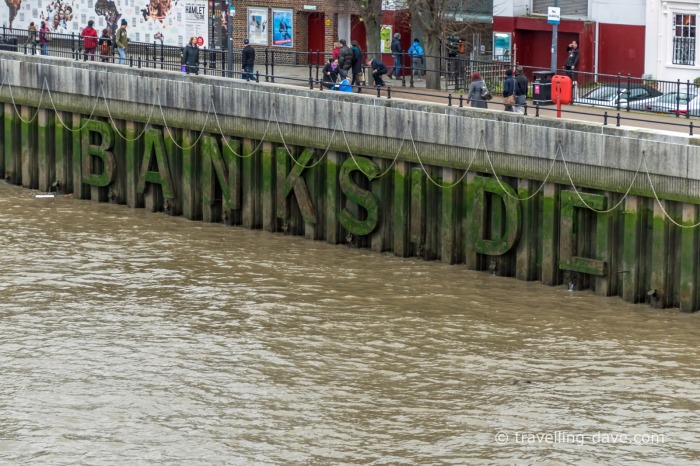 Outside the Tate Modern is the Millennium Bridge; after a wobbly start (literally!), it is now an established London’s landmark connecting Bankside with St.Paul’s Cathedral. A short walk along the river and the Globe Theater comes into view. Reconstructed near the site of the original theater, this peculiar structure is very popular in summer when Shakespeare’s plays are staged in the open-air theater (whatever the weather!); a backstage tour is available all year round. Next door is the Sam Wanamaker Playhouse where performances are staged by candlelight. 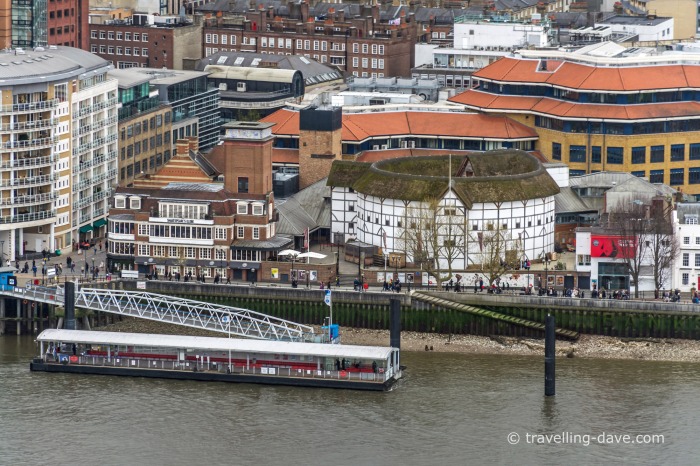 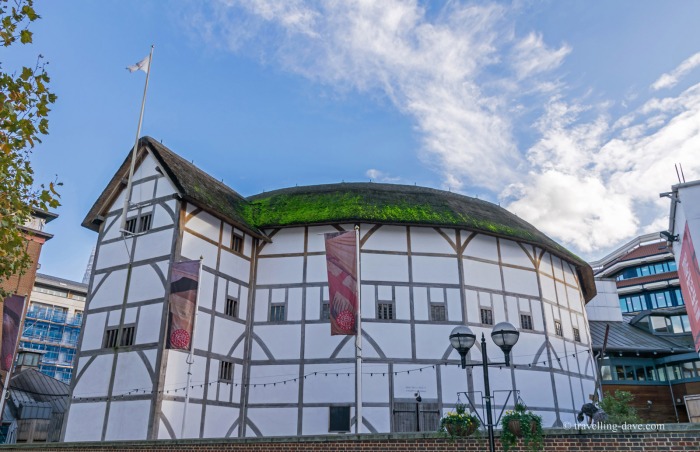 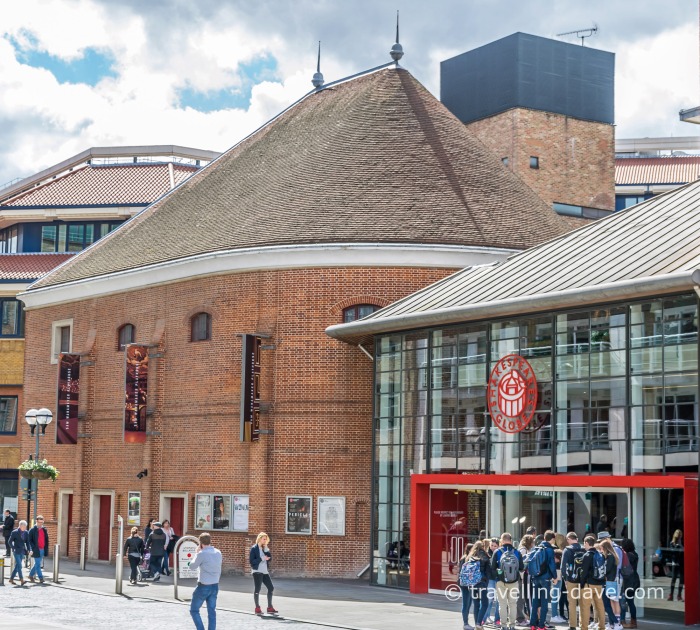 The next bridge is Southwark Bridge and further along is London Bridge. There are a number of places for food and drink around here: the Anchor, a colourful pub serving traditional British food, an authentic Greek restaurant and branches of Wagamama and Nando’s to name but a few. Part of the historic Winchester Palace can be seen nearby, including the Rose Arch Window preserved by English Heritage. For children, and the young at heart, a visit to the Golden Hinde, a ship sitting in a dry dock near Southwark Cathedral, is highly recommended. 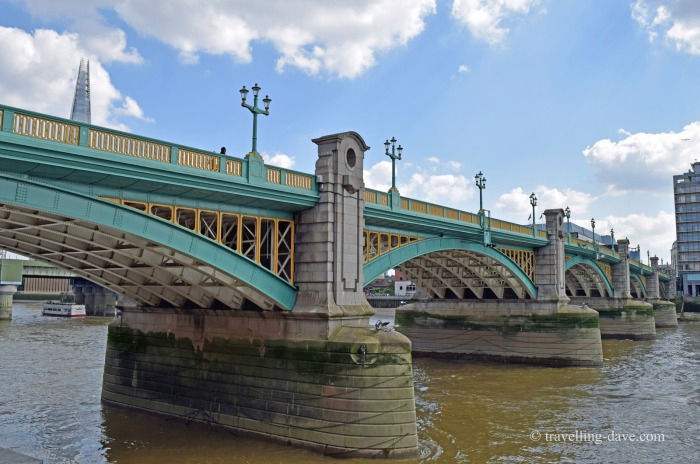 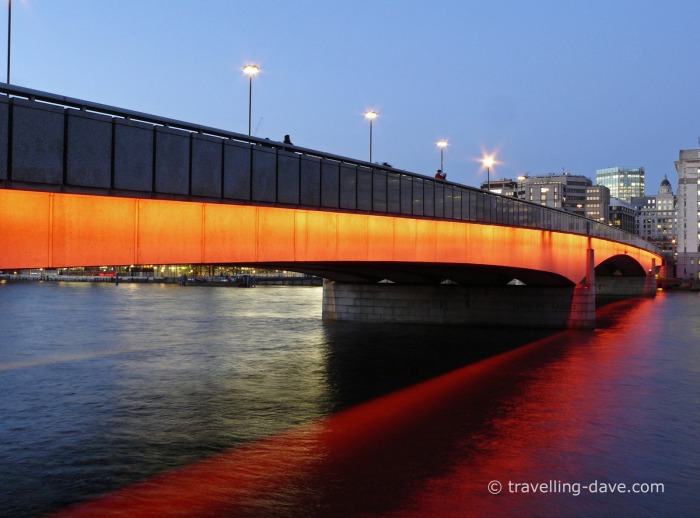 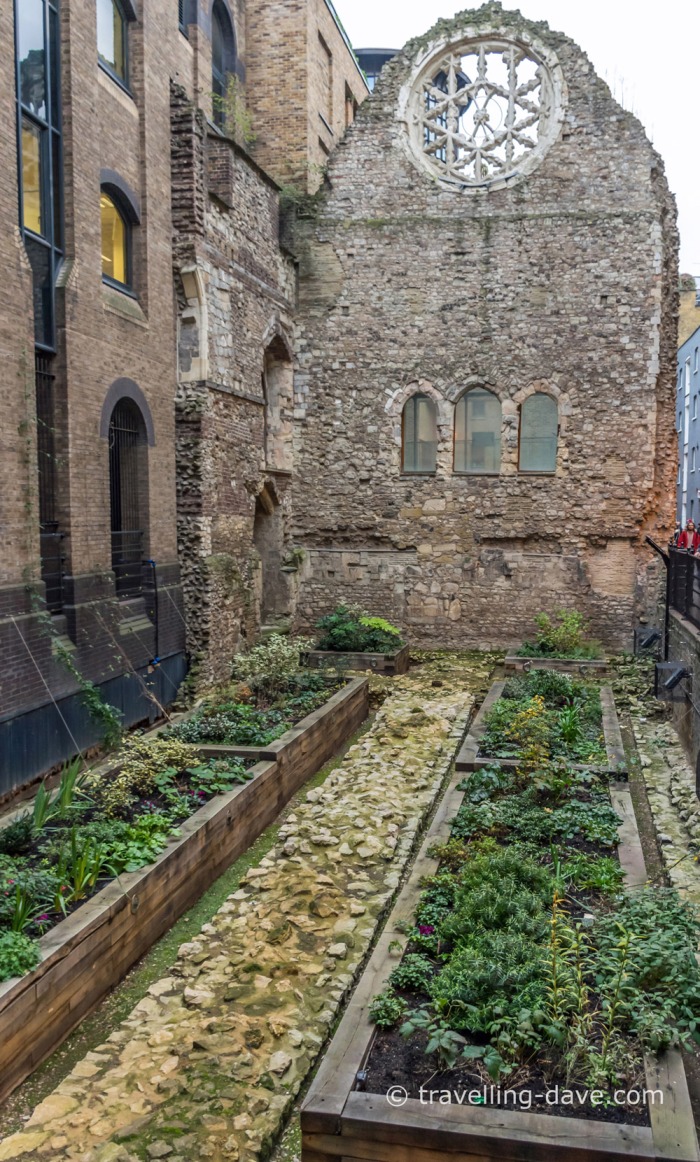 The Clink Prison Museum, HMS Belfast and Hay’s Galleria are not too far away. 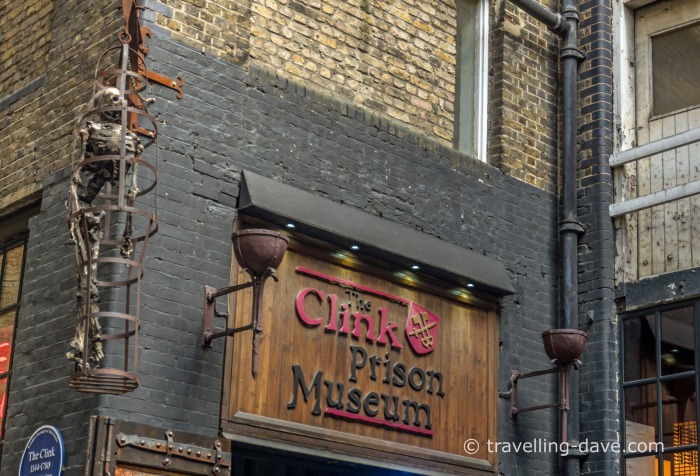 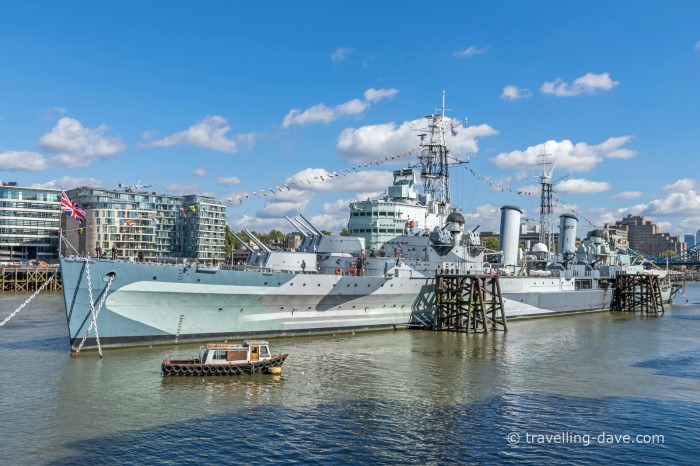 Walking away from the river Thames, the smell of food in the air will guide visitors to Borough Market; this is the main food market in London offering a wide range of both British and international products (opened Thursdays, Fridays and Saturdays). 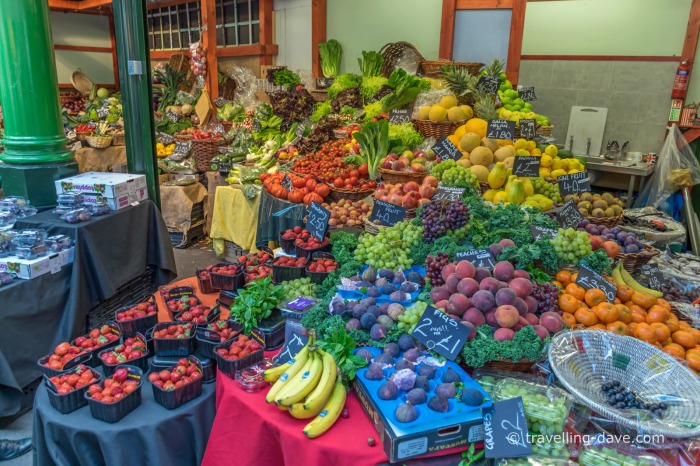 Looking up from Borough Market, the building towering over the area is the Shard. Designed by the renowned Italian architect Renzo Piano, it is the tallest building in Europe (309.6 meters/1,016 ft). Inaugurated in 2013, it houses luxury apartments, restaurants, a five star hotel and an observation deck split into two levels on the 69th and 72nd floors, giving yet again a difference perspective of what London looks like from high above 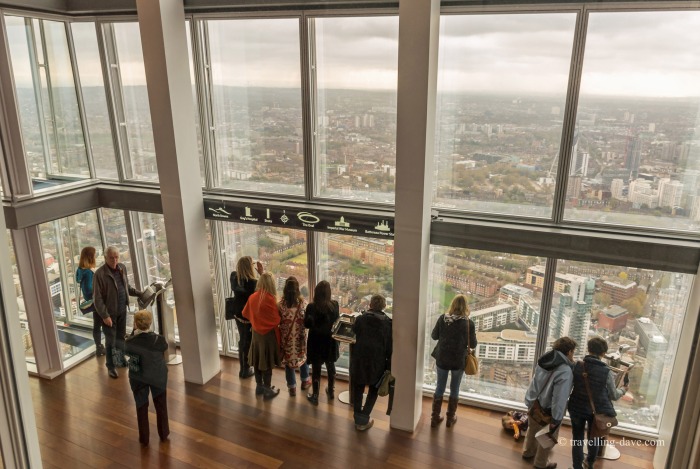 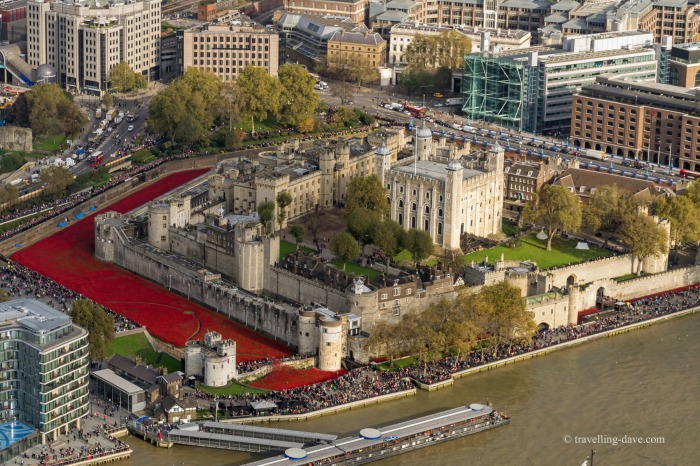 Back on the riverside, past London Bridge, this section of the Thames Path is called Queen’s Walk and leads to More London where City Hall is located; the building is the home of the Greater London Authority, the London Assembly and is where the office of the London Mayor is located. Part of the building can be visited daily but more access is granted during Open House Weekend when the terrace on the top is open to the public with spectacular views over London. 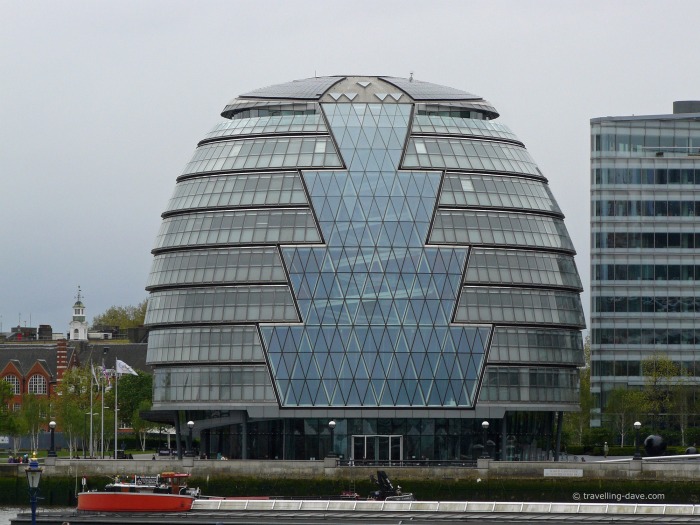 The walk could end at Tower Bridge, the most famous bridge in London, but it is worth to carry on walking just a little bit further to explore the area immediately after the bridge: Shad Thames. Here, old warehouses have been converted into (very) expensive flats with beautiful views of Tower Bridge with the City of London skyscrapers in the background. To enjoy the same views without the hefty price tag, there are many restaurants and bars with tables outside all along this stretch of the riverside. 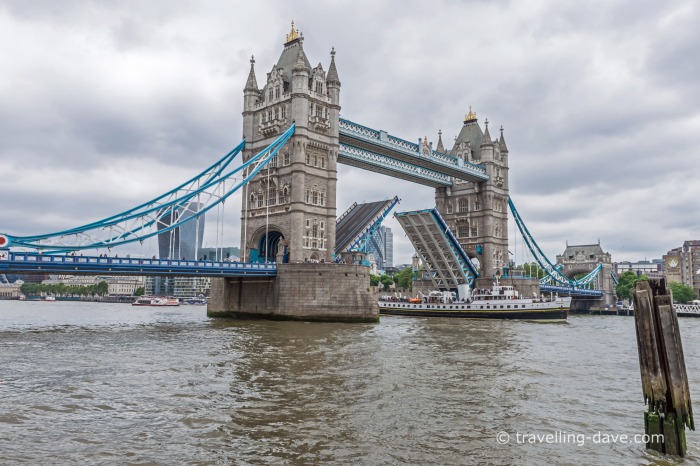 One thought on “Bridges of London, a riverside walk”