Christmas in London starts as early as late Summer when Selfridges and Harrods open their Christmas Shops, but it is at the beginning of November when the city gets into full Christmas mood. The lights get switched on in Oxford Street and Regent Street, drawing big crowds who come to see which celebrity has been chosen to flick that switch.

It is then the turn of the shops to unveil their elaborate Christmas window displays, competing to attract Christmas shoppers looking to spend their hard-earned cash on presents for their loved ones. 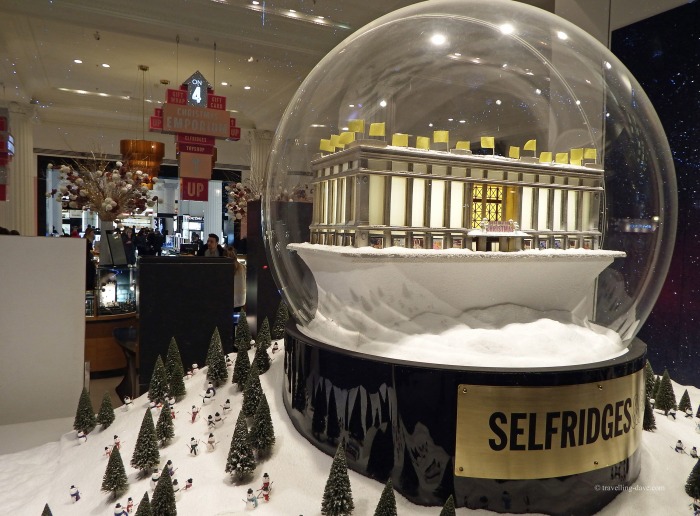 All the popular places in London get the Christmas treatment with lights and decorations everywhere including at Covent Garden,Piccadilly Circus, Bond Street and Carnaby Street in London’s West End, London railway stations and St.Katharine Dock, near Tower Bridge also gets transformed at Christmas. Even the top of the Shard is lit up to look like a giant Christmas Tree! 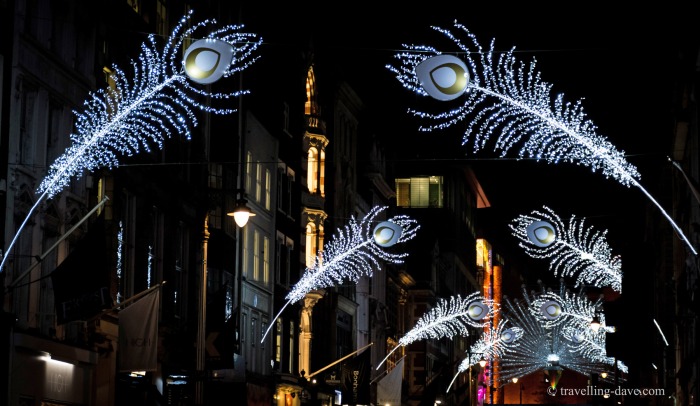 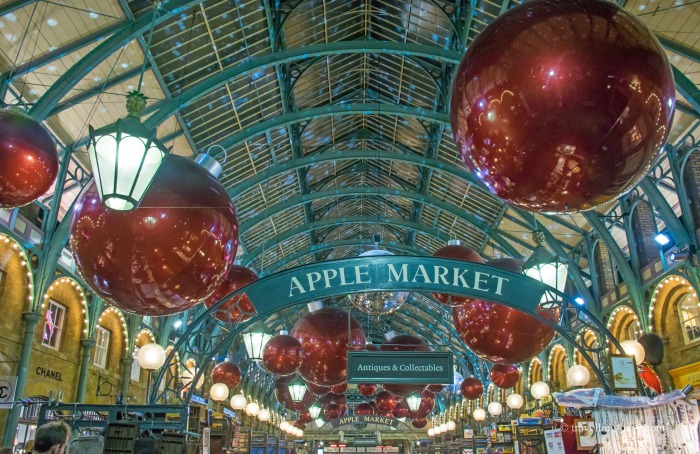 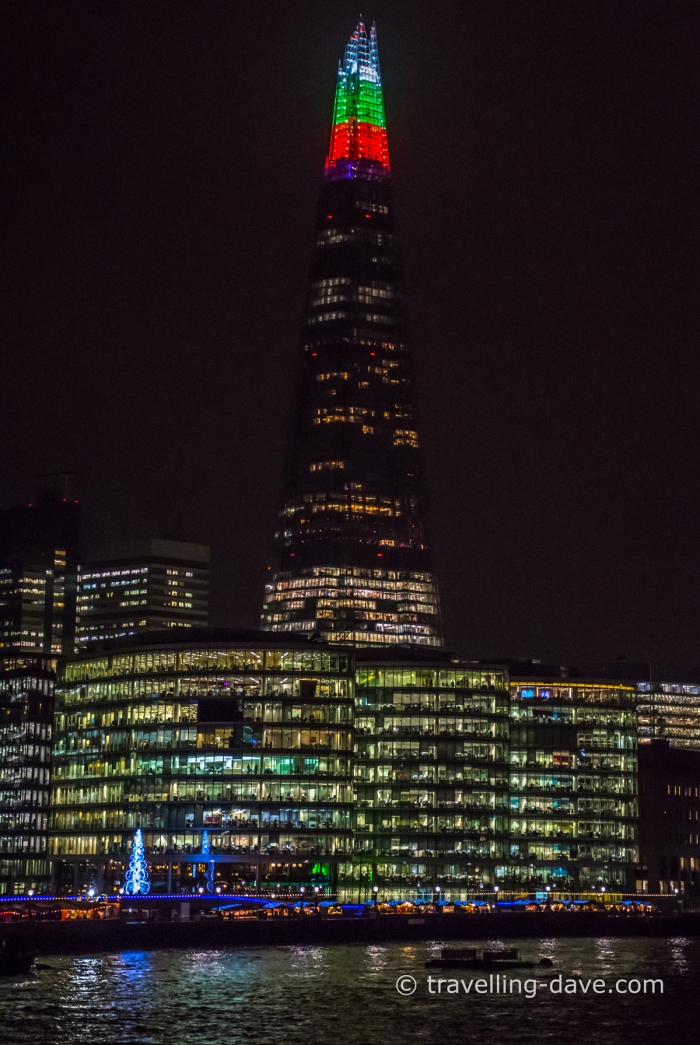 At the beginning of December a Christmas Tree is set up in Trafalgar Square; it has been a yearly tradition since 1947 for Norway to give a Christmas Tree to London to thank the British people for their help and support during World War II. From the first evening when the Tree is lit up and up to Christmas Day, a number of charitable organisations provide carol-singing services under the Tree; everyone is encourage to join in and help to raise money while getting into the Christmas spirit.

Ice skating rinks have also become a permanent fixture on the Christmas calendar in London. Some of the most popular ones are the one located at Somerset House, at the London Eye, outside the Natural History Museum, at the Tower of London and at Canary Wharf. 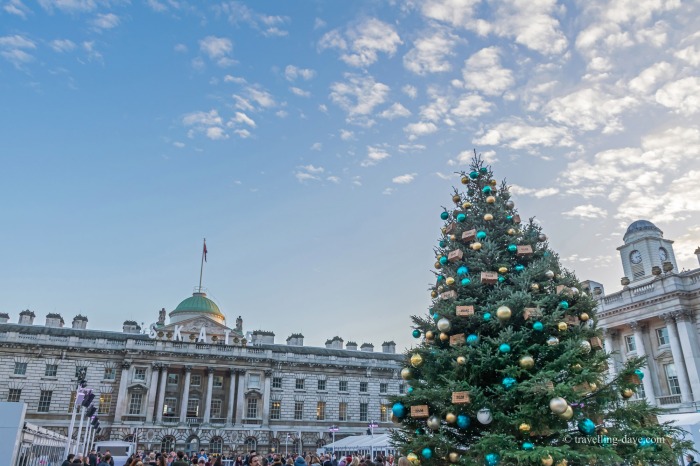 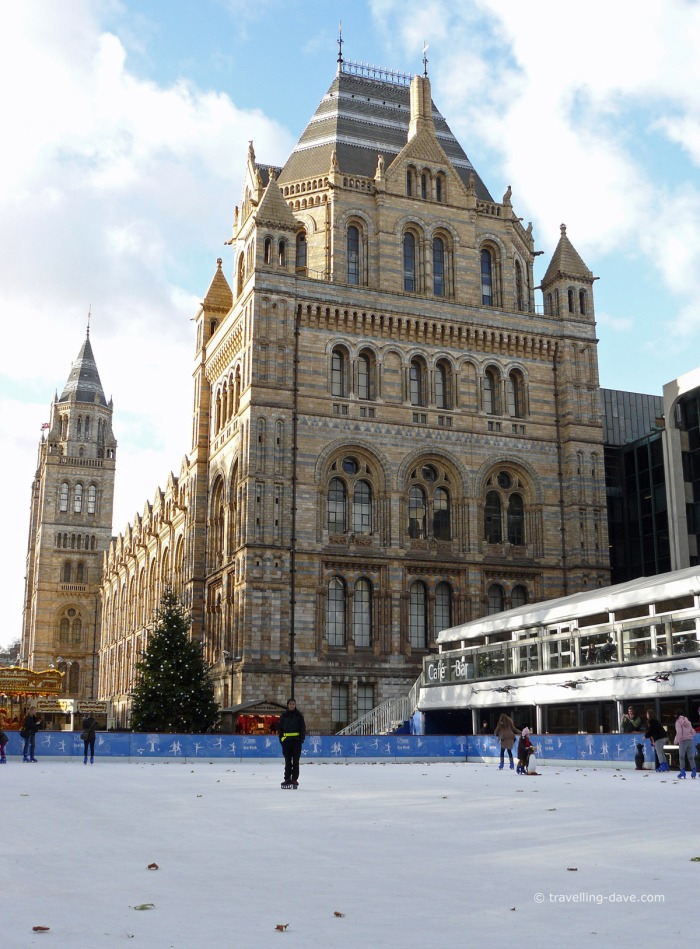 But the most popular one is probably the ice skating rink at Winter Wonderland in Hyde Park; what started as a few market stalls and fairground rides has morphed into a full Christmas extravaganza taking over a large part of the park. There is a section dedicated to children with rides, games and the chance to meet Santa, a Ferris wheel, a circus,ice sculptures in the Magical Ice Kingdom, an indoor beer garden and a very large German Christmas Market with many stalls selling traditional German food and mulled wine to warm body and soul on those cold winter evenings. 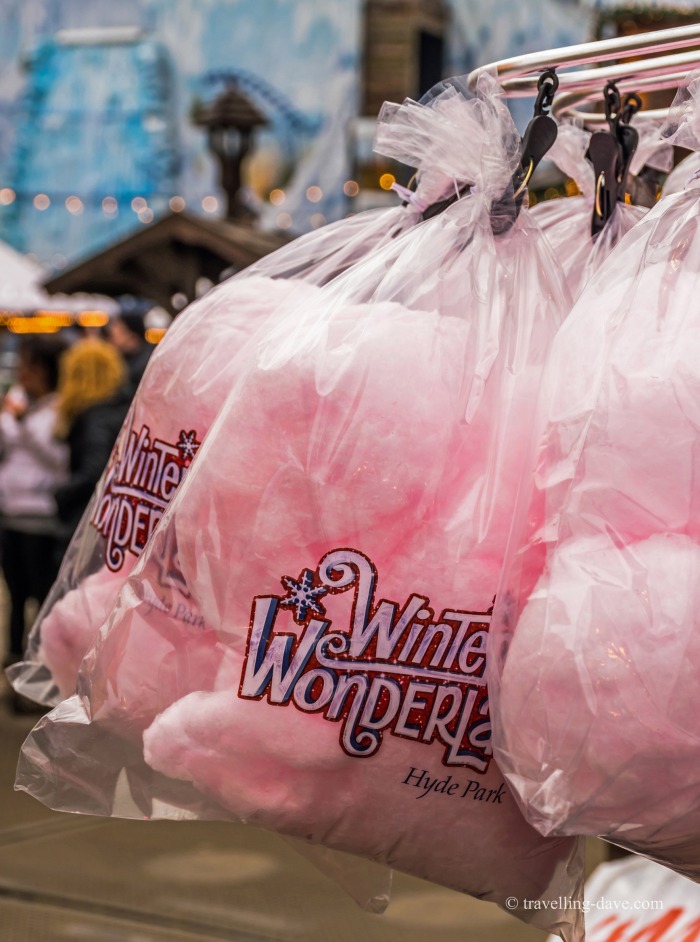 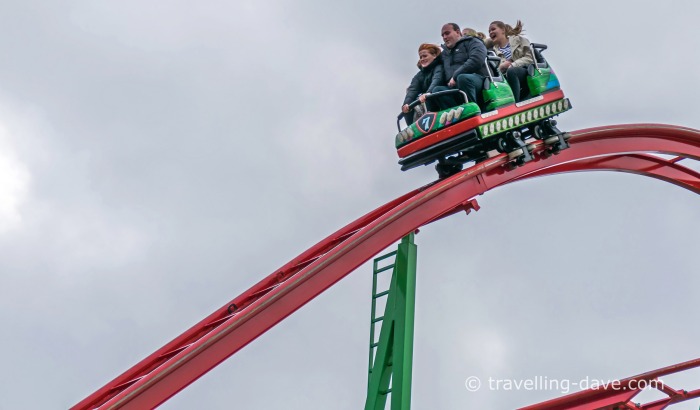 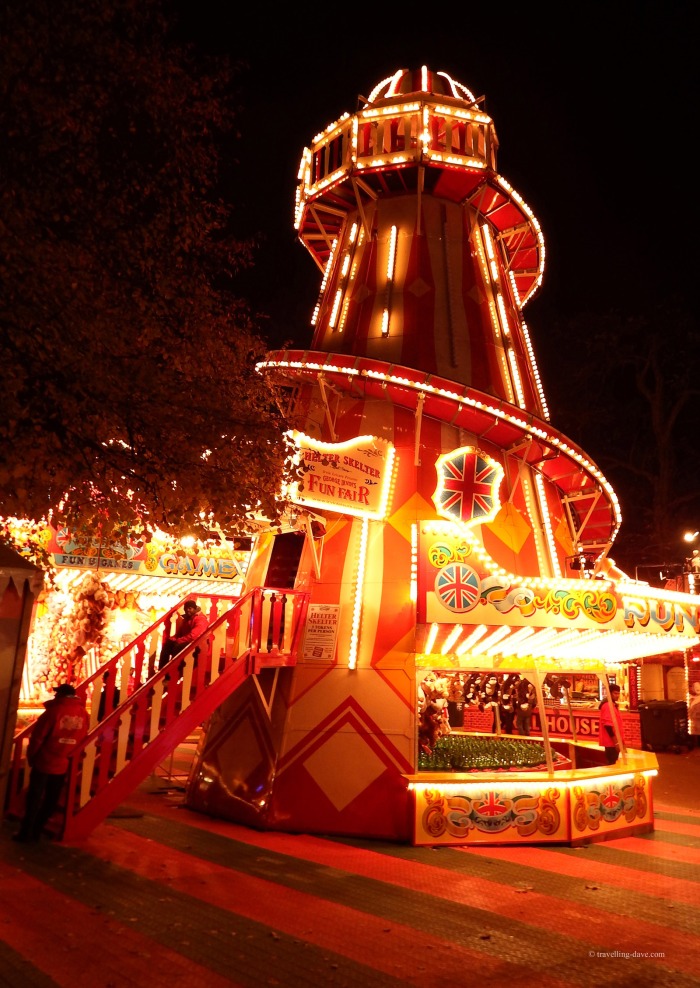 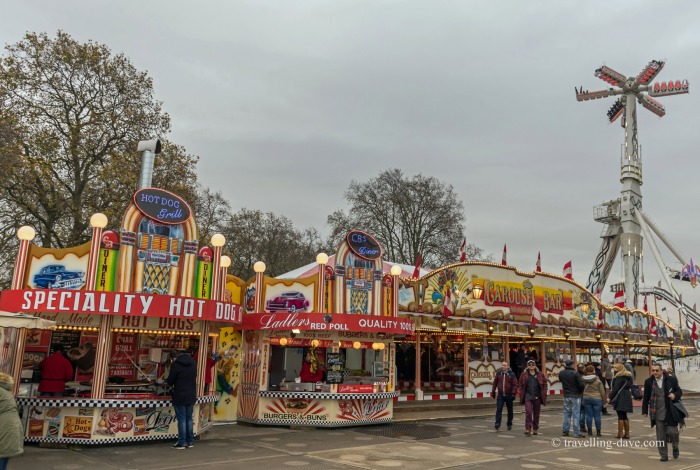 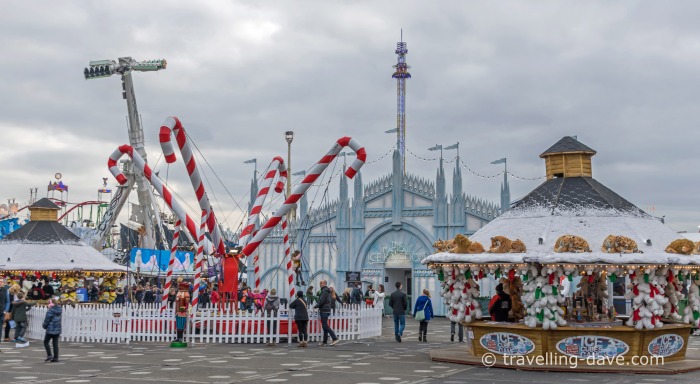 Another popular Christmas Market can be found on the South Bank; with a permanent merry-go-round, rides and a number of food and handcraft stalls, it has the added bonus of offering views of the Houses of Parliament and the Elizabeth Tower on one side and the London Eye on the other. 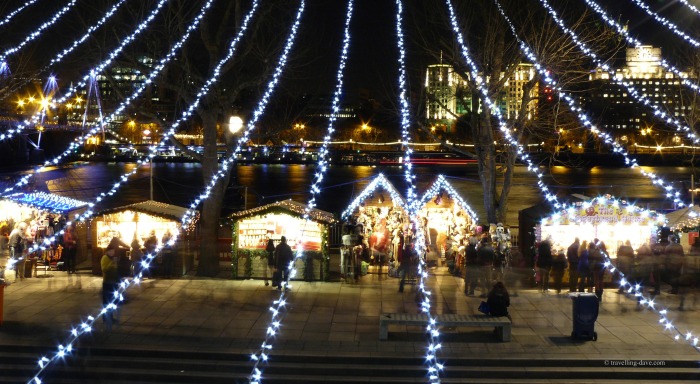 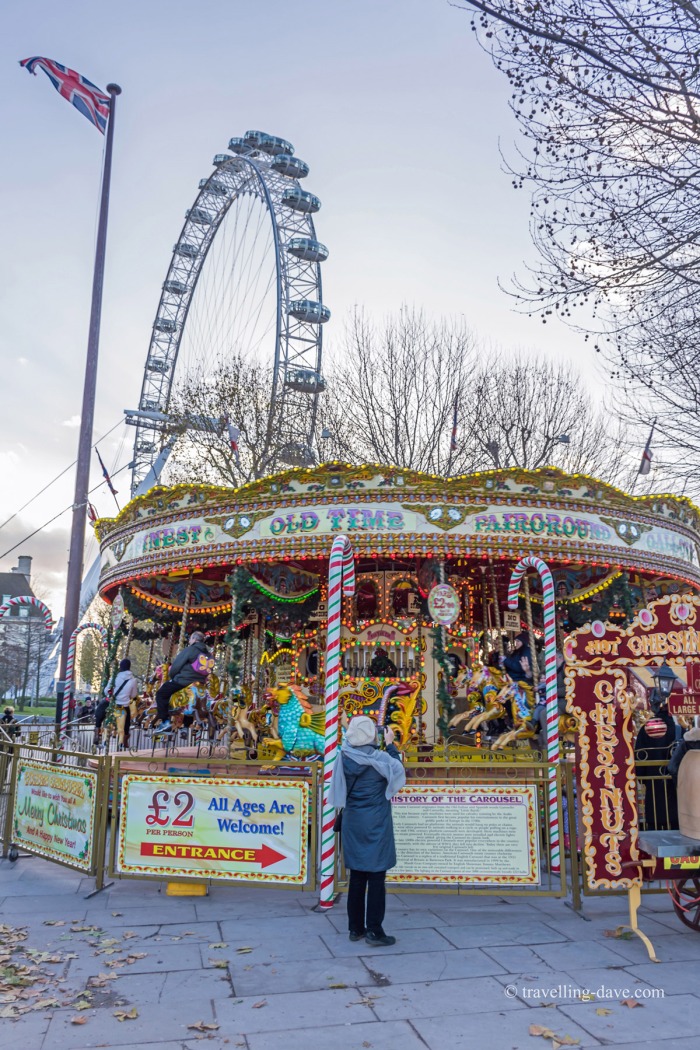 Further along the riverside, outside Tate Modern and at More London more stalls can be found against the backdrop of more beautiful views of London’s landmarks. Refreshments and hot drinks are on offer at a temporary structure shaped as a giant wrapped gift set up outside City Hall

In recent years, Leicester Square has been hosting a small Christmas Market right in the heart of London’s West End, again stalls and kiosks can be found here alongside rides and fairground games.

A popular feature of the London calendar in December is the charity walk Santa Run; organised to raise money for When You Wish Upon a Star set up to grant the wishes of seriously ill children, it sees men and women (and some children too) dress up as Santa and run, jog or walk along two routes around London’s famous landmarks.

Every year on the run up to Christmas there is that all important question that weather forecasters are trying to answer: will it be a White Christmas in London this year? Large amounts of money are placed on bets for or against it trying to beat the odds, but regardless who wins or loses, London under a blanket of snow is always a good sight!